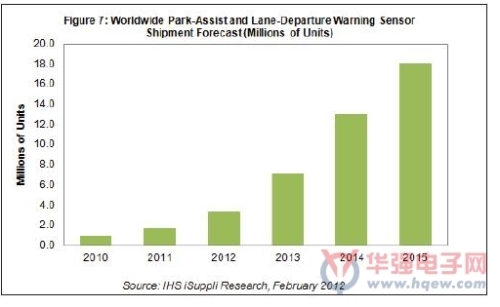 An auto car is a car that can be driven automatically with little manual intervention. It is likely to represent the future driving trend. According to the IHS Automotive Research Report, the automotive sensor market that has helped create this engineering miracle has emerged and will continue to grow at a high rate in the coming years.

Parking assist cameras and lane departure warning cameras are just two of the sensors that will appear in autopilot applications and are expected to grow strongly each year for the next five years. Shipments of this type of sensor are expected to reach 3.4 million in 2012, twice the 1.7 million of last year, and will reach 18 million by 2015, almost 20 times the 939,200 in 2010, as shown in the figure.

People have invested a lot of energy in the development of automatic cars. This kind of car is also called a robot car or a driverless car and can sense the surrounding environment and drive automatically. Although people can choose the destination, they do not need to perform mechanical operations.

The basis of automatic vehicle control is environmental and situational awareness, and current driver assistance systems rely on the same perception. This type of sensing capability is provided by various types of sensors inside and outside the vehicle. They monitor the front, rear, left, right, and various control systems in the vehicle. For example, a parking assist camera helps the driver to park and avoid collision with any objects or other cars, while the lane departure warning sensor can detect that the car may have strayed from the lane due to driver's distraction or misoperation.

While cameras and relays currently dominate the car, telemetry technology called LIDAR is being used on at least one prototype for autonomous driving, Googleâ€™s driverless car. Google's technology is used in a Toyota car. According to Wired magazine, Toyota Prius is equipped with Velodyne LIDAR Inc. A LIDAR sensor uses 64 laser heads that rotate 900 revolutions per minute to create 360-degree viewing angles around the car.

In addition, there are three radar sensors on the front, one on the back, and a high-resolution camera on the front windshield, all of which can instantly reflect the situation around the car. "Wired" said that the system generates a comprehensive image of the objects and areas around the car, analyzes and predicts its future trends, 20 times per second.

The sensor network installed on the prototype of the Google Prius prototype has appeared in several production models of several depots, providing lateral and radial automatic control. IHS believes that the rest of the work is to integrate these systems and all their sensor data into a comprehensive control system that can be used to implement all vehicle actions. But this is easy to say and it is difficult to do.

Mercedes-Benz S-Class sedans also have almost all advanced safety and driver assistance systems that German manufacturers must provide. Forward radar (long and short range), forward camera sensor, rear short range radar. There are additional sensors to monitor the car system and the driver input, ready to start the electronic stability control system when the curve turns over, or to remind the driver to avoid the danger of falling asleep or crash. In short, these sensors and systems monitor the areas that are currently most dangerous to the driver: the front area through which the car passes, and the blind spot behind and behind the car.

For the automotive industry, one of the challenges in launching an automatic car will be to introduce the concept to the generally cautious car buyers, although the unmanned system can theoretically reduce the workload of the driver. It can automatically perform a variety of tasks, such as parallel braking, and can also provide assistive support in the event of driver error or injury. The automotive industry knows that for many people, the car and driving process may be an emotional experience, so care must be taken when promoting the possible advantages of the new system, even if it may minimize harm or save lives.

At the same time, participants outside the auto industry, such as Google and others, are increasingly concerned with the personal mobility associated with automobiles, and these vendors are not tied to the traditional concepts of the automotive industry. These vendors continue to define processes, develop various systems, and prepare all kinds of vehicles. Auto cars seem to have to become the focus of attention in the future.

IHS believes that the two vehicles will meet somewhere in the middle, and the resulting innovation in the car will provide a new sense of security and freedom of movement.

There are capacitive Touch Screen Monitor raging from 8 to 86 inches, and infrared Touchscreen Monitor sizes from 32" to 86",

with a pure flat product structure, together with the excellent performance of touch experience and fast completion of information query and display, really easy to use interactive features.

The touchscreen monitors are use capacitive or ir infrared touch screen technology,which has been widely used in many occasions, such as car showroom, brand monopoly, hotel lobby, fairs, company showrooms, supermarkets, banks, government units and so on.