Most brake pressure regulators are integrated with the circuit control unit of ABSECU, which reduces the wires between the motor, solenoid valve and ECU, and simplifies the wiring harness, but the brake fluid that is frequently braked heats up to the ABSECU circuit chip and switch. Unfavorable. The Odyssey's ABSECU is located on the mounting bracket in front of the passenger's side skirting board (to be removed during inspection) (Fig. 1), while the brake hydraulic regulator is located on the left front side under the hood.

For the car ABS, most of the brake pressure regulators are drawn from the master cylinder (vacuum booster), two seamless steel pipes, controlled by four or eight solenoid valves inside the regulator, and then four The seam steel pipes are respectively connected to four wheel-distributing wheel cylinders, which are called "four channels". Individual control of the four wheel brakes is implemented.

When the brake pedal is depressed, a braking force is generated in the wheel cylinder. At this time, the two ball valves 5 and 6 of the electric liquid return pump 4 are closed, the electromagnetic valve EV1 is in a normally open state in which the valve is not working, and the EV2 is in a normally closed state in which the EV2 is not in operation. . At this time, the brake system pressure increases normally. ABS has not been activated and the wheel decelerates smoothly. The function of the brake release valve 7 installed in parallel (parallel) with the solenoid valve EV1 is to ensure that the pressure of the wheel cylinder is rapidly lowered when the driver relaxes the brake pedal.

When the wheel movement develops toward the lock-up trend and exceeds the allowable slip ratio, the ABSECU senses the signal through the wheel speed sensor 8, and the solenoid valve EVI continues to be turned off by the energization control, the solenoid valve EV2 is turned on by the energization control, and the ABSECU simultaneously controls the return pump. When the motor is working, the brake fluid is returned to the brake master cylinder through the liquid return pump 4, and the deceleration braking of the wheel becomes slow and transitions to re-acceleration. When the solenoid valve EV2 is opened, the accumulator 2 quickly sucks in the brake fluid, so that the pressure is rapidly lowered when the EV2 is opened, while avoiding the impact of the valve 6, and the buffer 9 is used to reduce the pulse vibration on the brake pedal. 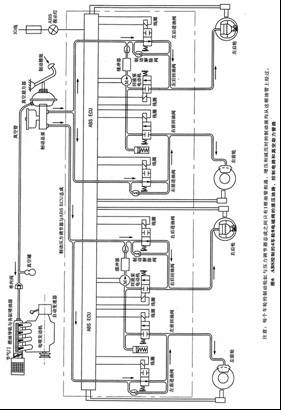 Figure 6 is a schematic diagram of the operation of four wheel brake cylinders combined with eight solenoid valves in an EHCU brake pressure regulator. Figure 6 mainly shows these key elements: 1 the relationship between the vacuum-assisted brake master cylinder and the engine intake pipe. The two four-channel hydraulic lines are arranged diagonally by x (cross), that is, the left rear wheel and the right front wheel share a hydraulic oil circuit; the left front wheel and the right rear wheel share a hydraulic oil circuit. Even if there is a brake oil circuit that causes two wheels on the diagonal to malfunction, the brake fails, and another two-wheel brake on the diagonal line is effective. 3 Two valves per wheel and two valves, mainly for each solenoid valve oil circuit, only two kinds of working conditions, the current of the control coil is only two kinds of working conditions: power-on and power-off, easy to control, and the reliability is greatly improved. If it is a single valve three-position, the ABSECU must control the output current in OA, 2A, 5A current, in order to make the regulating valve in the boosting, holding pressure and decompression conditions, the solenoid valve structure is more complicated. 4 Figure 6 shows the four wheel speed sensor signals of the four wheels sent to the ABSECU; the execution instructions of the ECU are output to the control coils of the eight solenoid valves, respectively. Each solenoid valve is only under the action of the control coil magnetic force and spring tension. 2 kinds of working conditions: the normally open inlet valve is energized and closed; the normally closed solenoid valve is energized to open. 5 The load-sensing proportional valve is often connected in series in the rear brake hydraulic circuit (not shown in Figure 6) to control the change of the braking force ratio of the front and rear wheels to ensure that the front wheels have the first time when braking with different loads. The tendency to lock in the rear wheel prevents the more dangerous side slip tails and effectively improves the directional stability during braking.

The oil circuit and circuit principle of the single-position three-position solenoid valve per wheel are shown in Fig. 8. Compared with the two-valve two-position solenoid valve of each wheel of Fig. 5, there are many similarities: 1 brake master cylinder to hydraulic regulator has one hydraulic oil pipe connected (4 wheels and 2 tubes); 2 hydraulic regulator to each wheel brake The clamp (wheel cylinder) has one seamless steel pipe connected (four rounds of four steel pipes); the 3ABSECU to the liquid return pump motor has only one wire connected. The difference is that the former has two solenoid valves and two wires. The latter has only one solenoid valve and only one wire. The working process is as follows. 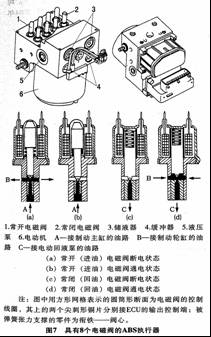 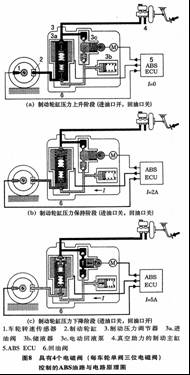 When each single solenoid valve is assembled, the main spring and the secondary spring connected to the oil inlet valve and the return oil valve have a certain pre-stress, and the two springs are reversely actuated, because the main spring has a large elastic force, so that The inlet valve is normally open (Fig. 8a) and the return valve is closed. When the driver starts to step on the brake pedal, the pressure in the brake master cylinder is increased by the master cylinder interface, the oil inlet valve 3a, and the wheel cylinder 2, and although no current flows into the solenoid valve ( I=0A), however, the solenoid valve is in the â€œboost stateâ€. Therefore, if the ABS fails to work, the brake pressure can be directly applied to the brake wheel cylinder to ensure the normal braking effect of the original vehicle, that is, the brake. The pressure can be increased both in the normal braking without ABS and in the case of ABS control.

When the controller excites the solenoid coil with a medium current I=2A, the electromagnetic force acting on the armature and causing it to move upward can only close the inlet valve by overcoming the elastic force of the main spring, and the return valve is maintained under the action of the secondary spring. Closed state, thus cutting off the passage between the brake master cylinder and the brake wheel cylinder, and also does not communicate with the liquid return port, so that the brake fluid in the brake wheel cylinder is sealed and the pressure is kept constant, at this time, the solenoid valve It is in a state of pressure.