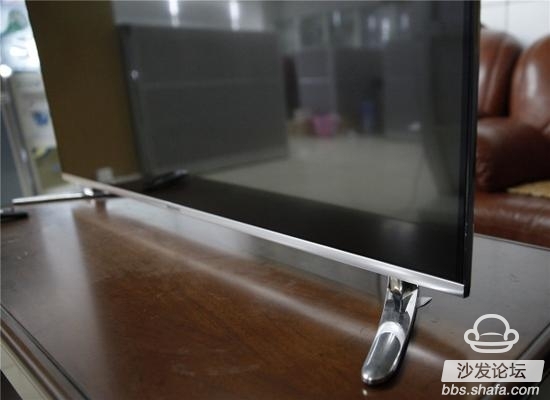 The biggest feature of the Skyworth G7200 is its non-rimmed design. The front is almost black, and underneath is the base that is officially called the "moon arc-shaped illusion base." The side can be seen with a thin metal edging. 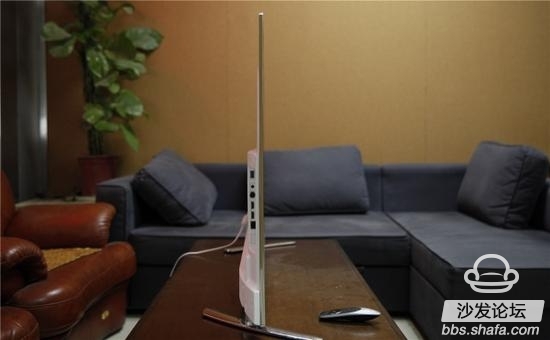 Thanks to the three-layer integrated module technology that combines the backlight with the LCD glass, the thickness of the body is reduced to 7.9mm. For the first time, the thickness of 7.9mm appears on the TV. This is really shocking. The effect can make up for the iPad's 55-inch but constant thickness effect. 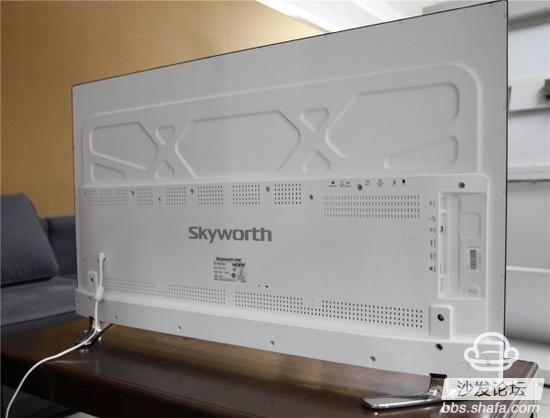 The upper side of the white back cover is made of metal. The steel back board has ribs to strengthen the body's rigidity. The built-in Geek Sound Blaster is underneath, and the TV also supports the external Geek Bass passive subwoofer unit. 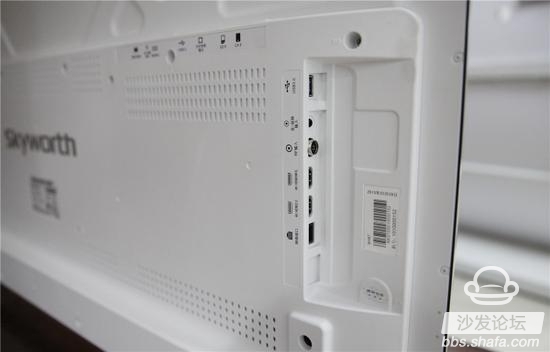 The right side of the fuselage has all the interfaces. In addition to the regular interface, the machine also provides HDMI2.0 and USB3.0 interfaces. 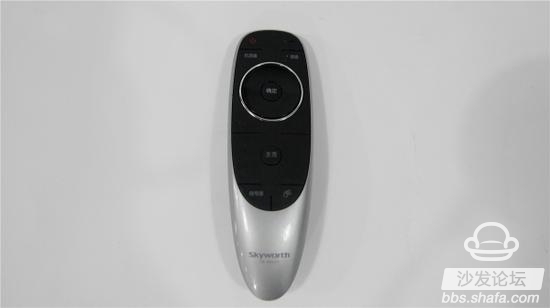 The G7200's remote control has a special shape. The ergonomically designed housing is somewhat similar to eggplant. Compared to traditional TVs, the number of keys has been greatly simplified. The optional accessories also include a 3D somatosensory inspection camera and gaming gun Bluetooth handle. 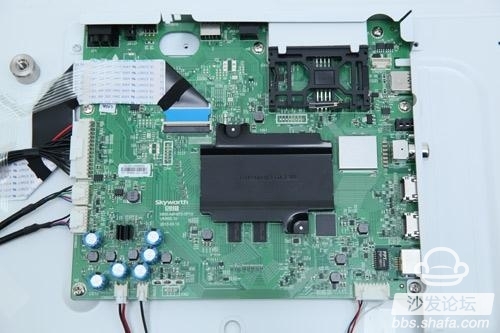 Open the protective cover on the back of the fuselage, you can see the circuit board of the machine, the wiring is more neat, put a large piece of heat sink on the CPU, the material is quite kind. 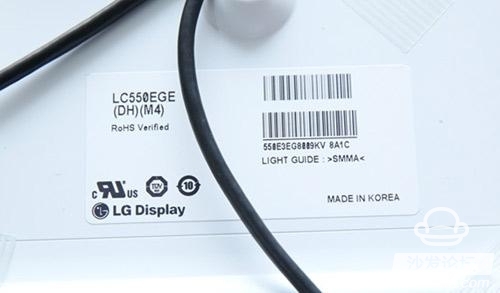 The back cover of the screen has the factory information of the screen, and the original LG screen made in Korea has its label and machine code on it.

On the picture quality, the parameters given by the manufacturers are quite gorgeous: LG Display's original 4-color (white, red, green, and blue) 4K Air screen panels use a cadmium-free color gamut technology, and also add D to the backlight diaphragm. -BEF double brightness enhancement film, after the crazy stuffing with technology, the actual performance of the machine will be? 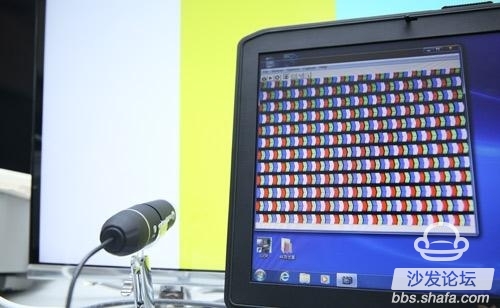 According to the lab pixel enlargement, each pixel of the LG Display panel is actually composed of four pixels: white, red, green, and blue, which adds more white pixels than conventional red, green, and blue color panels. Can significantly enhance the highlights of the screen, and in order to enhance the contrast of the panel. The function of the D-BEF brightness enhancement film is to collect light, which is also used to increase brightness.

According to the ultra-high definition display authentication technical specification promulgated by CESI (China Electronics Standardization Institute) in 2014, the laboratory has tested the parameters of the machine such as â€œclearness, reappearance rate, horizontal color viewing angle, contrastâ€.

The maximum display values â€‹â€‹of the machine's sharpness and reappearance rate are 2160 and 100, and the horizontal viewing angle reaches 178 degrees. This figure has approached the limit of the test equipment, while the horizontal brightness angle of view is 96 degrees, and the performance is quite excellent;

The logistics contrast ratio (brightness difference between the brightest white and the darkest black in the light and dark areas of the image) reached 341.1:1, compared to the 120:1 standard of ordinary television and the 200:1 requirement of the 4K television background. To a large extent. 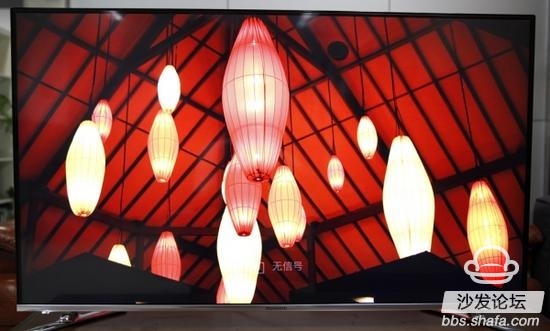 The actual perception, the machine's color performance is more colorful, and thanks to the 4K panel, the machine's screen resolution is more fierce. When playing 4K video, if you are watching at a closer distance, you can see a lot of details that cannot be seen on the small screen.

The additional white pixel of the 4 color 4K Air screen greatly enhances the maximum brightness of the picture. In the contrasting scene, the highlight details are quite rich. The D-BEF brightness enhancement film concentrates the scattered light and acts as a condenser to increase the light utilization efficiency, thereby increasing the brightness and making the dark details clearer. Although the chance of watching TV in the black field is small, As a price, the white pixels added by the machine cause the brightness of the machine to be very high, and it will look brighter when viewed in a darker scene.

The test environment is the national anechoic room of the National Digital Audio & Video and Multimedia Product Quality Supervision and Inspection Center. The measuring microphone is located 2m in front of the TV. The professional audio signal generator sends the signal to the television to sound, and then the microphone collects the actual sound information. Finally, the audio analyzer compares the original signal with the actual sound. 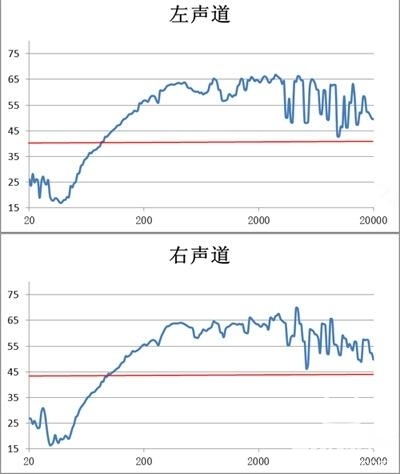 The acoustic frequency response range of the machine, the measured results are respectively left channel 85Hz ~ 20kHz, right channel 91Hz ~ 20kHz. The high-frequency part of the machine performs quite well and has reached the human ear limit (20 kHz). The overall value exceeds the 90Hz~15kHz of the vast majority of 4K TVs and far exceeds the 160~6.3kHz specified by the general specification of digital TV liquid crystal displays.

Total harmonic distortion (the smaller the value, the clearer the tone, less than 1% of the human ears can not distinguish), the left channel is 6%, the right channel is 5%, also far below the LCD specification 10%. The actual sense of hearing, the machine's sound quality is relatively pure, wide range, low noise floor, a good degree of reduction, and the volume is higher, turning over a few hundred pieces of PC sound problems. 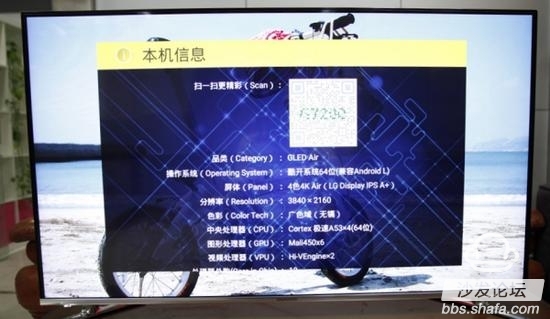 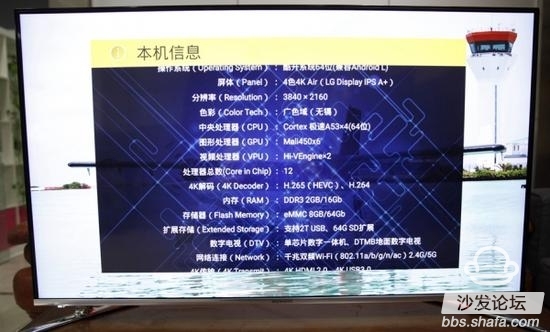 The CPU model of the machine is Hi3751V600. It is a 64-bit SoC independently developed by Huawei Hass. It uses a 64-bit 4-core A53 architecture and is clocked at 1.5GHz. The GPU is a 6-core Mali 450 with 16GB EMMC flash memory. In addition, it also incorporates two Hi-Vengine VPUs for hard decoding in the H.265 format, which can increase the smoothness of playback of network video files and reduce power consumption.

The security Bunny of the machine is divided into about 22000 points, and the performance and performance surpass the current mainstream 4-core A7/dual-core A9 processor. 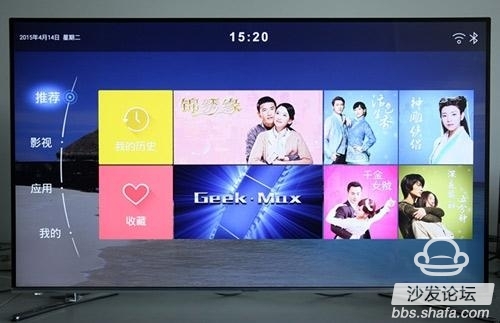 Specifically for the smart TV launched its own cool open system, and in order to maximize the performance of the new 64-bit CPU, the system upgrade to become the first 64-bit TV system, can be backward compatible with 32-bit Android applications.

In addition to 64-bit support, the system's biggest feature is the application platform with Geek Box, Geek Max, and Geek Pod as the core applications. In addition, Skyworth's own application market "Cool Application Circle". 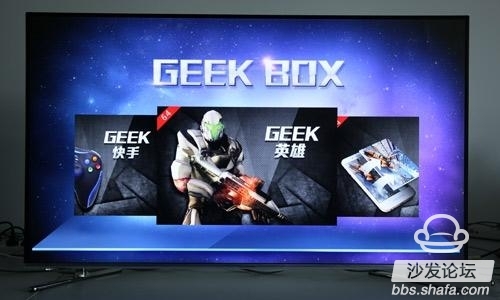 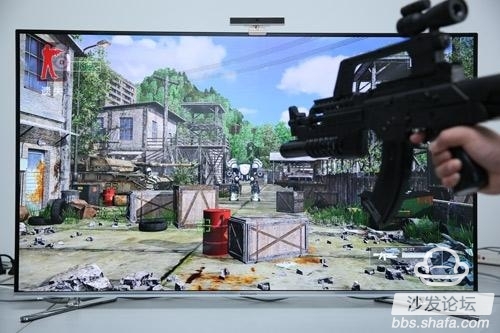 In the course of the game, the cursor/precision head will follow the pointing movement of the game gun, real-time tracking is quite sensitive, there is a kind of infrared real-time aiming at the enemy, when playing gun shooting game is simply the existence of cheating. 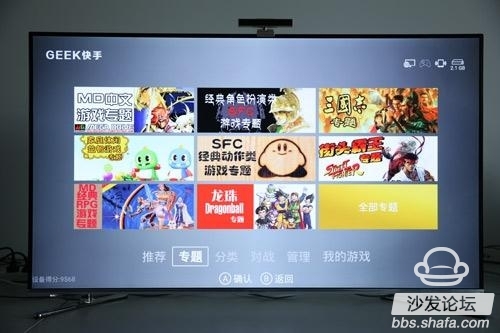 Geekâ€™s fast hands are the TV, handheld and arcade game markets. They include PSP, PS, N64, DC, MAME, FBA, FC, SFC, MD, and many other platforms for porting games, such as King of Fighters, alloy warheads, and robot battles. The classic masterpieces are all in it.

Many of the games support doubles and multiplayer games. You can use Bluetooth or USB handles to connect to your TV. If you have more casual friends, you can even use your phone as a controller to play multiplayer games. 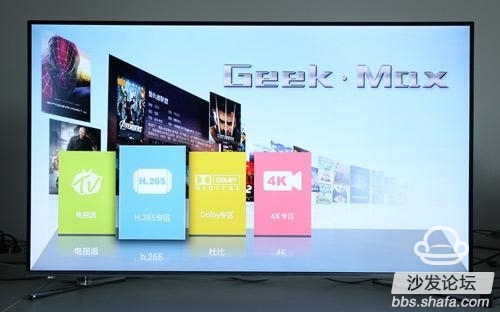 As the name suggests, the three zones are the H.265 standard-encoded video, 4K video, and the viewing channel that provides Dolby audio, corresponding to the user's needs for network speed, clarity, and sound effects. The source update rate is not bad. Dear, one-man martial arts and other newly-painted movies have already provided HD versions. 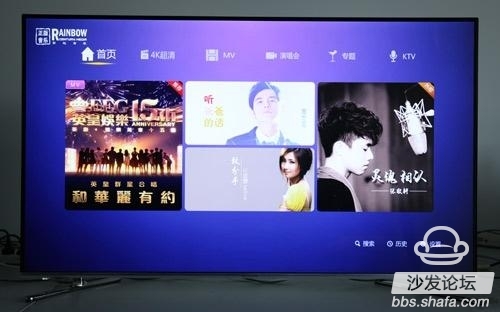 Geek Pod can be said to be Skyworth's G7200's K song platform, which contains MV resources including 4K ultra-clearance, MV, concert, special topic, and KTV.
The main push of this platform is the massive amount of genuine music copyright, including tens of thousands of KTV popular genuine songs and popular music videos including family karaoke, the latest MV premiere, and live concerts. This is obviously for users who have a demand for K songs. Even if they donâ€™t update their own microphones, these MVs are enough to sing for several years... 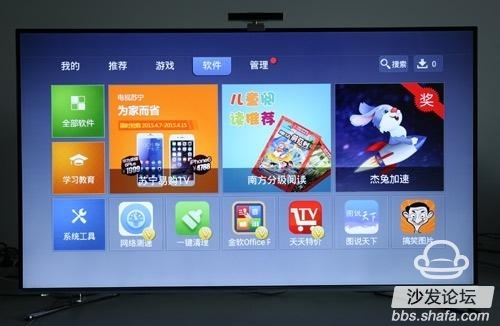 It is Skyworth's own TV application market. The market is categorized according to games, learning and education, and shopping. What is more special is learning education and shopping software. Among them, Suning's TV series and sofa purchases are relatively rare in TV applications. The experience is also quite good. It is considered an official pit in the TV shopping field. 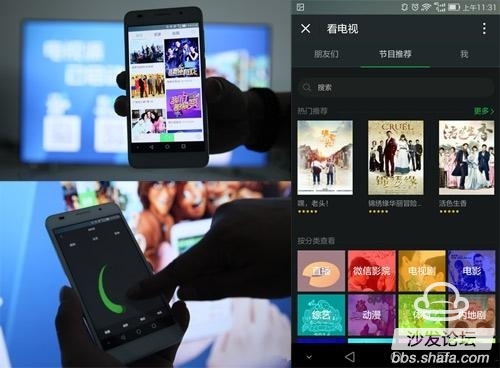 In addition to the conventional remote control key mapping, the built-in 7-screen video platform has an exclusive on-demand function that can be pushed to the TV with a push of a button in the mobile phone. In this way, the search that the TV is not very good at can be transferred to the mobile phone, and it is relatively easy to use. .

What is even rarer is that TV has its own WeChat public number. After attention, it can still be used as a remote control. At the same time, photos, music, and other content can be directly pushed to the TV screen. The delay is short and the experience is not bad.

Of course, in addition to the Skyworth G7200 is very high-end configuration and performance, its price is also relatively high-end. It is divided into 49-inch and 55-inch versions, priced at 5999 yuan and 8599 yuan.

The Skyworth G7200 is considered an attempt by domestic manufacturers to hit the high-end television industry. However, this time the route is still similar to the "cost-effectiveness" route: Although the price of the Skyworth G7200 has been close to that of foreign brands with the same size products, the configuration is still a lot higher. Fortunately, the cost-effectiveness of the domestic brands depends on improving performance rather than reducing prices.


Exceed Military Grade Anti-Drop Standards:Wearing phone case, your phone is certified to survive even if it falls 26 times from a height of 6Ft to a hard ground. Raised edges on both front and back strengthen the protection for camera and screen.
Keep Slim While Providing Military Grade Protection:Thanks to hybrid structure of rigid PC back with soft TPU edges equipped with Air Cushion Technology, this phone case half clear case maximizes the protection while keeping the profile as slim as possible.
Skin-friendly Nano Oleophobic Coating provides silky touch on back, feels so smooth, amazing comfort, while the non-slip bumper will provide an excellent grip and the German Bayer translucent material allows you to flaunt the Apple logo.
Super Anti-Fingerprints & Sensitive buttons:Thanks to matte non-glossy material, this phone case is super anti-fingerprints, anti-scratch and anti-oil. Independent and sensitive buttons will give you a definite touch feedback when pressing them.
Support Wireless Charging & Lifetime Warranty:You can enjoy wireless charging any time wearing this phone case.